I knew her name, but that was all. After she and my grandfather got divorced it’s as if she fell off the face of the earth. My mother refused to talk about her. When my grandfather wrote his memoirs, he didn’t even mention her name.

That sounds like a good entry-level genealogical project, doesn’t it? Finding your own grandmother. OK then, let’s get started.

The evidence I had to start out with was slim…

First there are the clues in my grandfather’s memoir, in which he states that he got married in 1932. Later in the memoir he talks about adventures he had with his “wife” in London during World War Two. This is clearly not the woman he claims to have married earlier, but he never says anything about how the transition from Wife #1 to Wife #2 came about. Rather confusing.

From my mother, I at least got a name: Mary Emma Berkley. She also gave me to understand that my grandfather had divorced her during or after the War. (Details were not forthcoming, but I was given to believe that he was the injured party). I got the names of Mary Emma’s parents, and where they had lived, but beyond that my mother clammed up tight. She claimed to not even know the date of Mary Emma’s death. She thought it might have been before I was born. She had no contact with her mother after the divorce, apparently.

I tried asking my father, but he had never met her and all he could say was that he never heard anything about her, either. He did remember one episode, shortly after he and my mother were married, though… He recalled my mother going to a funeral in Olds, and he thinks it might have been her mother’s. He remembers hearing that when my mother walked into the funeral home everyone was startled, she looked so much like the deceased it was as if she were standing there amongst them! Because of what I knew about my parents’ movements and residences before I was born I had to place that incident in 1961. So at least I had a tentative date, and I put a lot of weight in it.

I think I may have asked my mother about that funeral once, and she said she didn’t remember.

When I started getting my feet wet in online genealogical research one of the first websites I became familiar with was FamilySearch, mainly because it’s free. There I discovered something called a “Pedigree Resource File”, which is basically a member-submitted family tree. Here’s one that mentions my grandmother:

Whoever submitted this data certainly knew about my grandmother, since her parents match what I already knew. But it says that Mary Emma was born on August 29, 1911 and died on March 6, 1977. It gives no documentary source for those dates, and it has no information about her husband (my grandfather) or her children (my mother and her siblings). I took this information with a big grain of salt, especially because it contradicted the death year that I thought was correct, 1961. I thought it must be a mistake.

Since online research was a dead end I decided I needed to visit the Alberta Provincial Archives in Edmonton to get answers. What I discovered there blew the lid off everything I had previously thought about my grandmother.

The first big discovery I made was my grandparents’ actual marriage registration, which I got to hold in my own hands. I made a photocopy and brought it home with me: 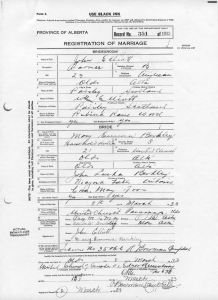 This gave me pause, because it contradicts my grandfather’s marriage year as stated in his memoir (1932). I also have a handwritten family tree of his in the notes that I inherited from him, where he states he was married in 1931. Wrong on both counts: he and Mary Emma were married on March 8, 1933.

Why would he mis-state his year of marriage? Didn’t he remember it? I’ll return to that in a moment.

My next discovery in the Archives was the decree nisi from my grandparents’ divorce proceedings, which contained a summary of the evidence presented at the trial and believe me, it’s a page-turner. I won’t get into details but it must have caused quite a family scandal back in the day (I’m starting to understand why nobody wanted to talk about any of this). Suffice it to say that it was Mary Emma who sued John for divorce (not the other way around), and in my humble opinion she was right to do so. The divorce was final in March of 1946.

I made those discoveries within the first hour or two of my initial visit to the Archives, and they knocked the wind out of me. As I was wandering around the place trying to get a sense of what other resources were available, a kindly researcher from the Alberta Genealogical Society noticed my wandering and asked if there was anything she could help me find. I described what I was looking for, and she led me straight to a row of bookshelves that contained the Local and Alberta Histories collection, a large set of books containing family and community histories, written by the locals themselves. There I quickly found the book that pertained to Hainstock, Alberta, a farming district near Olds that I had passing familiarity with because I knew that was where my great-grandfather received a homestead when he immigrated from Scotland in 1927.

In those pages, in black and white, I found an article all about my long-lost grandmother and her family.

The book is Glimpses of the past, 1894-1994 and you can read it online (no need to travel to Edmonton to get it); the relevant passage, written by Janis (Kilpatrick) Berkley, begins on page 45. Here it is:

This confirmed the dates in the Pedigree Resource File, and gave me a wealth of information about the Berkleys that I had had no clue of. Apparently my supposition that she died in 1961 was incorrect. It also told me she had been married to someone named Furguson (or Ferguson) before she died.

Just who was this Janis Berkley, and how did she know so much about my grandmother?

Part of the reason for my trip to Alberta, apart from researching at the Archives, was attending the funeral of my grandfather’s sister-in-law in Olds. I scarcely knew Aunt Esther but since she was almost the last survivor of my grandfather’s generation of siblings and their spouses, I considered it important to go. I might also meet cousins I never knew I had who might be able to give me more information about the things I was researching.

I also planned to use the opportunity to look up Janis Berkley, whoever she was, and interrogate her about my grandmother.

The first thing I did when I got to Olds was to visit the Hainstock Cemetery since I had a few hours to kill before the funeral. It’s a small cemetery and I was able to walk the length and breadth of it in under an hour. There I found the Berkley family plot, and nearby was an unkept grave with a broken headstone… 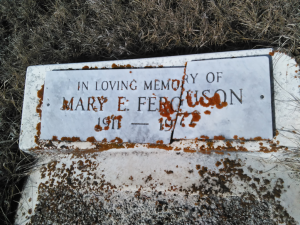 Well, there she was. And beside her with an identical headstone was her second husband George, who died the year after she did. I suppose in a perfect world he would have been my step-grandfather. I said hello.

Aunt Esther’s funeral was a success, from the perspective of my personal data-gathering goals. I learned from my cousins why my grandfather had fudged his marriage date– it was to hide the fact that his first child had been conceived out of wedlock, which was a big deal in his mind, although probably a lot more common than he was prepared to admit.

I also hung around outside the Olds Museum until it opened and talked to the archivist there. Wouldn’t you know, he did know Janis Berkley. She had moved down East but he promised to pass my email address on to her.

I waited against hope for a couple of weeks, and was delighted when she contacted me. She knows so much because she is married to one of Mary Emma’s nephews, and she took on the role of family historian back when the old timers were still alive and able to talk to us. I’m coming late to that game but fortunately Janis was more than willing to give me all the information I could handle, not only about my grandmother but about her siblings and their families. I was happy to reciprocate with information of my own, since they knew very little about us too.

I’m glad I was able to rehabilitate my grandmother’s memory and get to know her a little bit, so long after her death. It’s too bad this research came too late for my mother, who died before I embarked on this project and was never able to reconcile herself to her mother’s memory.

Here’s the best picture I have been able to find of Mary Emma. It came, surprisingly, from my grandfather’s collection. 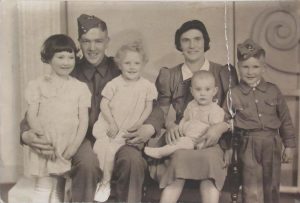 My best guess for dating this photo is August 1940, just before the Calgary Highlanders departed Camp Shilo en route to the War, when my grandfather had a few days leave to return home to say goodbye to his wife. This portrait paints quite the lovely picture of a happy family, and while I now know their marriage was pretty much on the rocks at this point, perhaps this is the best way to remember them.

A few people have asked me, publicly and privately, whatever happened to Mary Emma. Eventually she married a man who was able to care for her more than my grandfather could. This was George Ferguson, and since he was Roman Catholic he had to wait a number of years before he could get a dispensation to marry (her being a divorced Protestant and all). They had no children, and lived out the remainder of their lives in relative seclusion on George’s farm, quite uneventfully it seems.

Meanwhile my grandfather poisoned his children’s minds against their mother. He rewrote the story so many times in his own mind that he started forgetting the details. But since he had literary aspirations, and since he was an officer of the Crown and a Freemason and a pillar of the community, his side of the story endured. Mary Emma’s just sank quietly into the earth.