On this day in 1945 my Aunty Kay got away from the drudgery of her administrative posting with Canadian Army Headquarters in Aalst, Belgium, and took 48-hour leave in Paris. She had an awesome time and a few days later wrote all about the experience in a letter to her Ma and Pop (my great-grandparents) and her broth 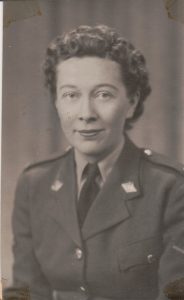 er Mike back home. (Mike had flat feet and was rejected for service, so his main contribution to the war effort was sending his sister cartons of Export A cigarettes on a regular basis).

I don’t really remember Kathleen Bublick (I only met her when I was a baby), but I am fascinated by her short life and adventuresome spirit. She worked her way up to the rank of sergeant in the CWACS (Canadian Women’s Army Corps) in London during WWII and dearly wanted to get across to the Continent after D-Day, but the quota of sergeants had already been filled so she took a voluntary reduction in rank back down to private in order to join the advancing Canadian Army. She eventually made it all the way to Germany, and stayed there long after V-E day taking care of the paperwork that transferred Canadian soldiers home or else to the still ongoing Pacific Theatre.

I have a lot of information about Kay’s life that I want to share eventually. I am waiting for Archives Canada to fulfill my request for her military dossier, but I’m not expecting that for another 6 months. In the meantime, to commemorate the 74th anniversary of her adventure in Paris, I’ll post her letter home. 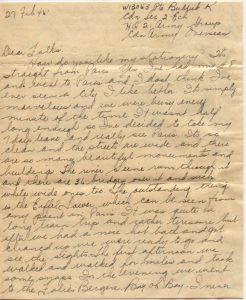 How do you like my stationary? It’s straight from Paris. Yes I’ve had my 48 and went to Paris and I don’t think I’ve ever seen a city I like better. It’s simply marvelous and we were busy every minute of the time. It wasn’t half long enough so I’ve decided to take my 7 days leave and really see Paris.

It’s so clean and the streets are wide and there are so many beautiful monuments and buildings. The river Seine runs through it and there are 36 bridges over it and such white wide ones too. The outstanding thing is the Eiffel Tower which can be seen from any point in Paris.

It was quite a long train trip and rather tiresome but after we had a nice hot bath and got cleaned up we were ready to go and see the sights. The first afternoon we walked and walked for miles and took some snaps. In the evening we went to the Folies Bergere. Boy oh Boy. I never saw anything like it in my life. The scenery and costumes were marvelous. Some of the girls didn’t wear very much. A little silver girdle, a pair of slippers and a smile. Some of it was rather embarrassing and we sure were thankful we were all girls instead of with men. We walked back to our hotel which was quite a considerable distance but the moon was bright and the streets were lit up to a certain extent.

Next morning we got up at 8:30 to go on a bus tour. It lasted about 3 hours and we saw all the most important spots such as Notre Dame, The Concorde, Champs Elisee, Napoleon’s Tomb, The Trocadero and ever so many other spots. In the afternoon we walked again and shopped. At night we went to a dance in the Hotel Dorsay where the ballroom is absolutely breathtaking with its glass chandeliers and bronze and gilt walls. We had a grand time. The next morning we slept in and had breakfast in bed. Sunday afternoon we walked some more and took pictures and in the evening we caught the train back. I’m still tired as I haven’t walked so much since leaving London. I’m sure going back for my 7 days leave. 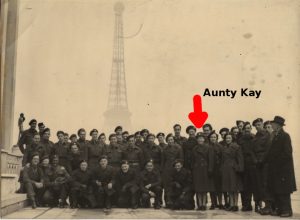 The snaps I’m enclosing were taken here when there was a fair on or “Mardis Gras” as they call it. One Sunday afternoon we went and tried our hand at shooting, rode on the little cars and ate potato chips. The Mardi Gras lasted for about two weeks. I imagine in peace time they really go to town and celebrate, dances, parades and much more to eat and drink. 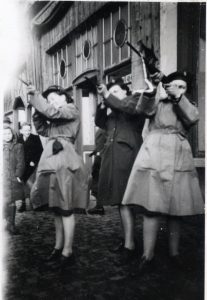 I haven’t been getting any mail for two weeks now. I wonder what’s the matter with everybody.

The weather has been grand. A little rain, a little cold but lots of sunshine. In fact it feels more like April than February. The trees are getting green and the grass is like velvet already.

I’ve been very busy at work. I changed my job and now I sure can’t complain of not having anything to do. The days are much too short for all the work that has to be done. However, we’re pretty well caught up now and I hope it won’t be too rushed from now on.

I hope you’re all feeling fine and that the weather has improved. I’m feeling pretty good these days. Nothing to complain about but I’m sure looking forward to coming home and I hope it won’t be too long before we’re on the move toward Canada.

Cheerio for this time and lots of love.

Mike I rec’d another carton of Exports. Thanks a million.

This entry was posted in Genealogy and tagged Bublicks, Kathleen Bublick. Bookmark the permalink.