86 years ago today– and a decade before she joined the Allied Occupation Force in Belgium– Aunty Kay had a harrowing brush with death in the Oldman River.

P.S. Rest in peace, Dr. Melling, and thanks. 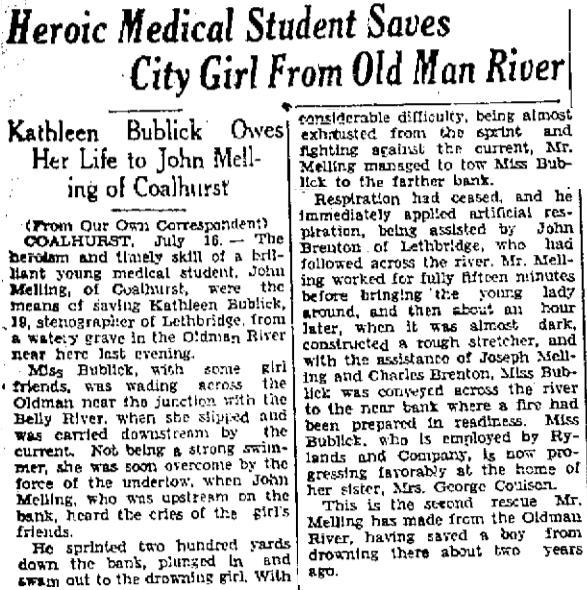 Kathleen Bublick Owes Her Life to John Melling of Coalhurst

(From Our Own Correspondent)

COALHURST, July 16.- The heroism and timely skill of a brilliant young medical student, John Melling, of Coalhurst, were the means of saving Kathleen Bublick, 19, stenographer of Lethbridge, from a watery grave in the Oldman River near here last evening.

Miss Bublick, with some girl friends, was wading across the Oldman near the junction with the Belly River, when she slipped and was carried downstream by the current. Not being a strong swimmer, she was soon overcome by the force of the undertow, when John Melling, who was upstream on the bank, heard the cries of the girl’s friends.

He sprinted two hundred yards down the bank, plunged in and swam out to the drowning girl. With considerable difficulty, being almost exhausted from the sprint and fighting against the current, Mr. Melling managed to tow Miss Bublick to the farther bank.

Respiration had ceased, and he immediately applied artificial respiration, being assisted by John Brenton of Lethbridge, who had followed across the river. Mr. Melling worked for fully fifteen minutes before bringing the young lady around, and then about an hour later, when it was almost dark, constructed a rough stretcher, and with the assistance of Joseph Melling and Charles Brenton, Miss Bublick was conveyed across the river to the near bank where a fire had been prepared in readiness. Miss Bublick, who is employed by Rylands and Company, is now progressing favorably at the home of her sister, Mrs. George Coulson.

This is the second rescue Mr. Melling has made from the Oldman River, having saved a boy from drowning there about two years ago. 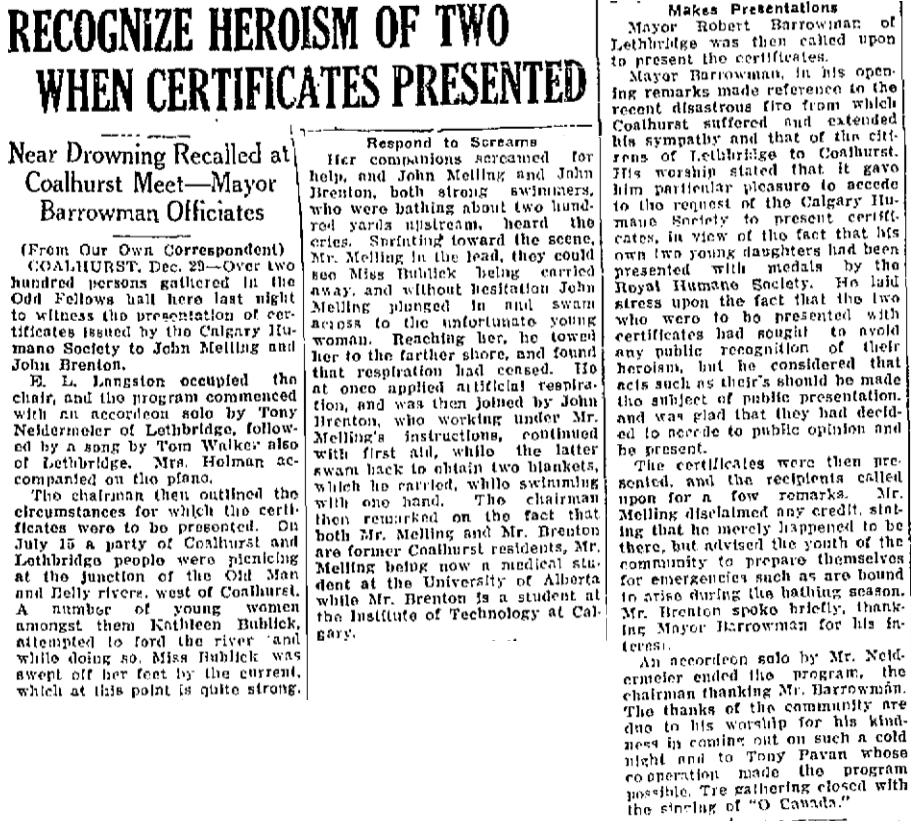 Near Drowning Recalled at Coalhurst Meet –

(From Our Own Correspondent)

COALHURST, Dec. 29 – Over two hundred persons gathered in the Odd Fellows hall here last night to witness the presentation of certificates issued by the Calgary Humane Society to John Melling and John Brenton.

E. L. Langston occupied the chair, and the program commenced with an accordeon solo by Tony Neidermeier of Lethbridge, followed by a song by Tom Walker also of Lethbridge. Mrs. Holman accompanied on the piano.

The chairman then outlined the circumstances for which the certificates were to be presented. On July 15 a party of Coalhurst and Lethbridge people were picnicing at the junction of the Old Man and Belly rivers, west of Coalhurst. A number of young women amongst them Kathleen Bublick, attempted to ford the river and while doing so Miss Bublick was swept off her feet by the current, which at this point is quite strong.

Her companions screamed for help, and John Melling and John Brenton, both strong swimmers, who were bathing about two hundred yards upstream, heard the cries. Sprinting toward the scene, Mr. Melling in the lead, they could see Miss Bublick being carried away, and without hesitation John Melling plunged in and swam across to the unfortunate young woman. Reaching her, he towed her to the farther shore, and found that respiration had ceased. He at once applied artificial respiration, and was then joined by John Brenton, who working under Mr. Melling’s instructions, continued with first aid, while the latter swam back to obtain two blankets, which he carried, while swimming with one hand. The chairman then remarked on the fact that both Mr. Melling and Mr. Brenton are former Coalhurst residents, Mr. Melling being now a medical student at the University of Alberta while Mr. Brenton is a student at the Institute of Technology at Calgary.

Mayor Robert Barrowman of Lethbridge was then called upon to present the certificates.

Mayor Barrowman, in his opening remarks made reference in the recent disastrous fire from which Coalhurst suffered and extended his sympathy and that of the citizens of Lethbridge to Coalhurst. His worship stated that it gave him particular pleasure to accede to the request of the Calgary Humane Society to present certificates, in view of the fact that his own two young daughters had been presented with medals by the Royal Humane Society. He laid stress upon the fact that the two who were to be presented with certificates had sought to avoid any public recognition of their heroism, but he considered that acts such as theirs should be made the subject of public presentation, and was glad that they had decided to accede to public opinion and be present.

The certificates were then presented, and the recipients called upon for a few remarks. Mr. Melling disclaimed any credit, stating that he merely happened to be there, but advised the youth of the community to prepare themselves for emergencies such as are bound to arise during the bathing season. Mr. Brenton spoke briefly, thanking Mayor Barrowman for his interest.

An accordeon solo by Mr. Neidermeier ended the program, the chairman thanking Mr. Barrowman. The thanks of the community are due to his worship for his kindness in coming out on such a cold night and to Tony Pavan whose cooperation made the program possible. The gathering closed with the singing of “O Canada.”

This entry was posted in Genealogy and tagged Bublicks, Kathleen Bublick. Bookmark the permalink.