Julia Swedish Was Not Swedish!

There’s my great-grandmother Julia Bublick, presiding over the wedding of her daughter, my grandmother, Mayre Coulson. You can tell by this photo who’s in charge here, can’t you?

Julia’s husband Joe stands to her left. I didn’t know Joe and Julia; they both died long before I was born, and all I knew about them was a few dribs and drabs I heard from my dad. He couldn’t tell me much about them either, since they were gone by the time he was a teenager.

Here are some of the things I knew about them…

I knew they were Ukrainian, but they didn’t speak Ukrainian, according to my dad. Joe read a funny newspaper with crazy writing that looked the same no matter which way you held it. They didn’t wear colorful Ukrainian costumes, celebrate Ukrainian Christmas, shumka dance or make pysanky like the “normal” Ukrainian kids I knew growing up. They were from a mysterious place called Little Poland, which wasn’t in Poland, except maybe it was, sometimes. I knew they grew up in the same village and knew each other from childhood, but they didn’t get married until they met by chance at a party in New York, having made the journey to North America independently. I knew their name was Bublick, except it was originally Bubniak, and nobody seems to know why they changed it. Joe was a cheerful man, always cracking jokes. Julia was serious, always hard at work, and never smiled.

And one other thing I knew about Julia… her maiden name was Swedish.

Originally I thought that meant she was from Sweden, but no. Swedish was her actual name. Julia Swedish. A Ukrainian from Little Poland named Swedish. How odd.

When I started getting serious about genealogy a few years ago I discovered how difficult it is to search online for somebody named Swedish; search engines seem to think you are looking for something completely different. I had a feeling that Swedish was not her original name. It had to be an anglicized spelling of something else, but I couldn’t tell what. 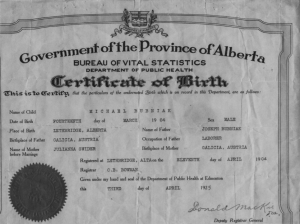 I made a bit of a breakthrough when a cousin showed me Uncle Mike’s birth certificate. (Uncle Mike is the dashing gent with the mustache and wavy hair in the wedding pic above. Joe and Julia’s eldest and only son, he was born a year or two before they changed the family name from Bubniak to Bublick.)

The important thing here is that it tells me Julia’s maiden name: Swider. Pronounced (I now know) SVEE-dur, it makes perfect sense that English-speaking folk in southern Alberta’s coal belt would have mashed that into “Swedish”. 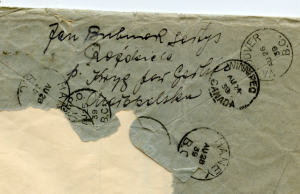 The cousin who had Uncle Mike’s birth certificate also had this beautiful nugget in her possession: an envelope from someone back in the “old country” who addressed Joe Bublick as my brother. The return address (translated) reads:

Rozdziele! There’s a place-name that nobody in the family had ever heard of before. That gave me a focus for my research.

Rozdziele (so Polish Wikipedia tells me) lies in what is today the Polish county of Gorlice, in the foothills of the Carpathian Mountains just north of the Slovakian border, between the Polish city of Crakow and the Ukrainian city of Lviv. During the 19th century Crakow and Lviv (Lemberg) were the twin capitals of the now-defunct Kingdom of Galicia and Lodomeria, a quasi-independent crown realm of the Austrian Empire which was formed out of the First and Third Partitions of Poland.

Małopolska, or “Lesser Poland”, is the historical name for the region that comprises the part of Galicia where Rozdziele lies. The region had been mostly under Polish administration since the Middle Ages, and it came under Austrian rule when Poland ceased to exist at the end of the 18th century, but the inhabitants were a diverse cultural mix. Prior to World War II, the region was dotted with enclaves of three main ethnicities: Poles, Ukrainians, and Jews. They all technically owed allegiance to the Hapsburg Crown and in that sense were “Austrian” citizens, but school would have been conducted in Polish and they spoke their own languages at home (in the case of my ancestors, an archaic Ukrainian dialect). This explains why in some documents my great-grandparents are described as Austrian, but actual Austrians were rare in those parts.

You can use this map to zoom out and see where the place-names of interest to our family– Rozdziele, Lipinki, Męcina Wielka, etc.– lie with respect to the modern borders of Poland and Ukraine.

Take a close look at the postmarks on that envelope– late August 1939, the very eve of the German invasion of Poland (September 1st), which started World War II. The story of what happened in that region during and after the War is inconceivably tragic, but I’ll save that (and the mystery of what is in those letters) for another day. Let’s stick with a discussion of that name, Swedish.

Newspapers.com is a great resource sometimes; it lets you do text searches of old newspapers without reading them page-by-page. It happens to have a fairly complete set of old papers from Lethbridge, Alberta, during the time Joe and Julia lived in the nearby towns of Diamond City, Commerce, and Coalhurst, and it gave me a wealth of data about their doings and the doings of their children. The children are frequently mentioned in the Society page– Joe and Julia evidently encouraged their kids, especially the girls, to participate in all aspects of upper-middle-class Anglo culture, which perhaps explains why their Ukrainian heritage was downplayed, and may also help to explain why they changed their name.

Anyways, here’s a notice I found in the classified section in 1926 that reminded me of Julia’s connection to the Swedish name. 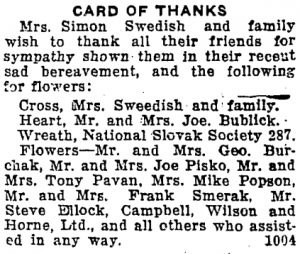 It appears that Joe and Julia sent a large, heart-shaped floral arrangement to the funeral of one Simon Swedish. Was this a relative of Julia’s? I mentioned it to my dad and he suddenly remembered other people in Lethbridge with the Swedish name… there was Steve and Matt, who worked for the Pilsner brewery, and a younger Julia, who married a man named Wilson and moved to Dog Creek in British Columbia… but he had never heard of Simon Swedish, and didn’t know if any of these people were related to his grandma, Julia Bublick. 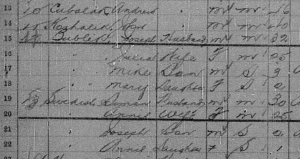 Bublick and Swedish families in the 1906 Northwest Canada Census

Here’s an important clue that I found in the 1906 Census of Alberta, Saskatchewan, and Manitoba: someone named Simon Swedish living right next door to Joe and Julia Bublick in Lethbridge. This doesn’t prove that Julia and Simon were related, but it strongly indicates a connection between the two families going back decades.

Another tool I turn to frequently is the set of Henderson Directories (city directories) maintained by the University of Alberta. In 1925, I see that Simon Swedish was a grocer in Lethbridge, and Nicholas (who the Census confirmed was Simon’s son) was working for Simon as a clerk.

And so, using the Census, Henderson Directories, newspaper articles, and death records I found in the Provincial Archives of Alberta, I was able to piece together the rough outline of Simon’s life.

(By the way, Simon’s daughter Julia must have been friends with my grandmother, Mayre, because I have photos of Julia’s wedding from Mayre’s photo album. But I never met my grandmother, so all I have to go on about her friends and personal life prior to my dad’s birth are just suppositions and educated guesses.)

Simon also had a sister, Anna, who was born in Galicia and joined him in Alberta. She married a farmer named Michael Kret, also from Galicia, and they moved to Albion in upstate New York in about 1919. Michael was killed in a car accident in 1922.

Simon’s general store remained in the same spot, 920 7th Avenue North, Lethbridge, for years. Later it became a grocery store. In May of 1926, at the young age of 49, Simon died of “chronic nephritis”. Tragically his son Nicholas, who had been working as a clerk at the store but who recently moved to Drumheller to work in the coal mines, died of cerebral meningitis that same year. After that the name of the business changed to “A. Swedish and Sons”, suggesting that Anna and her children tried to keep it going, but it disappeared from the city directory sometime around 1928. Anna lived on in the same house for many years, dying of a heart attack in 1941.

This dry recounting of facts surely hides a great deal of turmoil and pain that I have little personal insight into. The death of so many children, the sudden death of father and son, the collapse of the family business… it’s hard to imagine, but I can understand why I heard about none of it. It all transpired before my dad, who is my main conduit for so much of the early family history, was even born. And anyway, none of this establishes a definitive family link between the Swedishes and the Bublicks (and, ultimately, to me). I seemed to have hit a brick wall using the North-American-based, English-language resources I was familiar with.

That’s when the Archiwum Państwowe w Rzeszowie— the Polish State Archives in Rzeszów, Poland– came to the rescue. For only 166 Polish Zlotys (about $39 US) they supplied me with a trove of birth, death and marriage records scanned from the actual church registers of the Greek Catholic parish of Męcina Wielka, which included the village of Rozdziele where my Bubniak ancestors lived and died. And in amongst the Swider records (remember, the original family name was Swider, not Swedish) I found this…

A boy named Simeon Swider, born May 11, 1876. Could this be our Simon Swedish? The date of birth matches Simon’s birth year, which I obtained from the headstone on his grave.

In case your Latin is rusty, here’s the translation:

In case there’s any doubt about the identity of this boy, Simeon has a younger sister, Julianna, born 5 years after him:

That’s got to be Julia Bublick’s birth registration.

(Note that Simeon and Julianna had the same midwife, Maria Grymata; it seems she had a long career in Rozdziele as I’ve found her name on other documents as well.)

Well that seals it. Julia Bublick, my great-grandmother, and Simon Swedish, the grocer of Lethbridge, were brother and sister! Simon’s descendants (and I know they must be out there) would be my 3rd cousins.

I also have a birth record for Anna, Simon’s sister who came to Alberta and later moved to New York with Mike Kret. These three siblings (Simon, Julia, Anna) apparently left Rozdziele (along with friends and cousins named Bubniak, Dragan, Telep, Nowak, and Kret), perhaps at different times but all prior to 1905. I know now that at least one of them arrived in North America via Ellis Island in New York City. Perhaps they all came via that route, and made their way across the continent to Fort Benton, Montana, and from there up the well-worn ox-cart trail to Fort McLeod, and they reunited in wind-swept Lethbridge in the days before Alberta was a province of Canada, where they all started new lives.

And not a word about this not-insignificant multi-family migration from a little village at the foot of the Carpathians to the dusty expanse of southern Alberta was passed along to my generation; I had to piece it together from the records.

Here then, for the record, are the generations descended from Anton Swider, the farmer of Perhrymka (probably Pielgrzymka), and Maria Dragan, whom I now know to be my great-great-great grandparents. If any 2nd, 3rd, or 4th cousins out there reading this have details to fill in, feel free to contact me!

One Response to Julia Swedish Was Not Swedish!