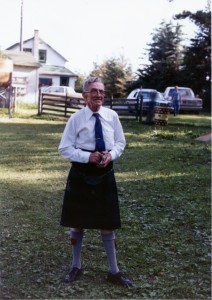 My grandfather John was a big fan of all things Scottish. He continued to speak with a brogue (or tried to) despite living in Canada for 64 years, played the bagpipes (until he chopped two fingers off, that’s another story), and wore a kilt at every opportunity. He styled himself “Head of the Clan” and hosted large family reunions at his acreage near Rocky Mountain House where there was bagpipe music and plenty of Johnny Walker Red (although purists might not regard that as proper Scotch at all, but I digress).

There’s a good reason for all that Scottish-ness. He was, after all, Scottish. He was born in Paisley, an industrial city on the boundary between the Scottish Highlands and Lowlands. He grew up in the Highlands, though. His father was employed as a gamekeeper for the great estates and John, as the eldest son, helped his father as much as he could. The family lived in several locations across the Highlands in the decade following World War One (here is a Google Map I prepared of all the places they lived in those days) and John drank in the culture of those parts with gusto. It was a formative time for him and he remembered it with great longing for the rest of his life.

In my post about The Family That Almost Was, I presented a letter wherein John alluded to a rumor that his grandfather had actually come from Ireland. I have subsequently conferred with various cousins and they, too, received wind of this rumor through their forebears, John’s brothers and sisters, so it must have been fairly common knowledge to that generation. Nobody, though, has been able to give me any details, so I suspect that a rumor is all it was to them. How to confirm or dispel that rumor?

John’s grandfather (the alleged Irishman) was also named John Elliott, so for the sake of convenience let’s refer to him as “old” John. While I had little information about him I did know his date of marriage and his wife’s maiden name, and that led me to their marriage registration:

This contains lots of fascinating details, but the one to focus on here is the names of old John’s parents: William Elliot and Mary Ingram. Where did they come from?

A quick search of the Scottish archives doesn’t turn up any likely marriages between William Elliot(t) and Mary Ingram. If, however, we make the assumption that they were married in Ireland, we find the following record in the LDS Church’s database known as Ireland Marriages, 1619-1898:

Making a long story short, I worked my way through all of William and Mary’s children using census, birth, death and marriage records, and discovered that the marriage record found on the LDS website is, in fact, correct: they were married on November 9, 1857 in Lowtherstown, County Fermanagh, Ireland, part of what was then referred to as the Ulster Plantation. While I have been unable to find a birth or baptism record for old John (the Irish vital statistics search tools are not, I find, as easy to work with as the Scottish ones), it is clear from the Scottish Census that old John was indeed born in Ireland; the family first appears on the Scottish Census in 1871 when old John is 12 and is recorded to have been born in Ireland. He had a younger sister, Mary Jean, also born in Ireland about 1861. Between 1861 and 1864, it seems, the family moved from Ireland to Paisley, and 6 more children were added to the family, all of whom I’ve been able to trace through their birth, marriage, and death records.

But that’s not the end of the story. Read The Irish Connection, Part 2.