The Family That Almost Was

I’ve decided to resurrect this old blog of mine with musings about what I’m learning from genealogy.

My grandfather, who died over a quarter-century ago, got bit by the genealogy bug a few years before he died, and he left behind some notes and charts of his research. Nobody else (including me) was at all interested in the family tree at that time, so his notes lay in a box all these years and never saw the light of day until my mother died recently and those papers came to me. I had already started my own research by then, and his notes were a welcome addition to my own growing body of knowledge.

My grandfather, having left Scotland at the age of 17 and spending most of his life in Canada, had little knowledge of his roots beyond his own parents and grandparents and his cousins and uncles and aunts back in the Old Country that he kept in touch with (albeit infrequently). He started getting curious in his old age, so in early 1990 he wrote to his Uncle Archie back in Paisley with questions about the family history, and Archie provided a few details, but all in all it wasn’t much. My grandfather gathered up this information and sent it to the Elliott Clan Historian in Scotland, thinking that he might find something out that way. I have a carbon copy of that letter; it contains some helpful names and dates, and a couple of tantalizing pieces of news that I hadn’t known about. 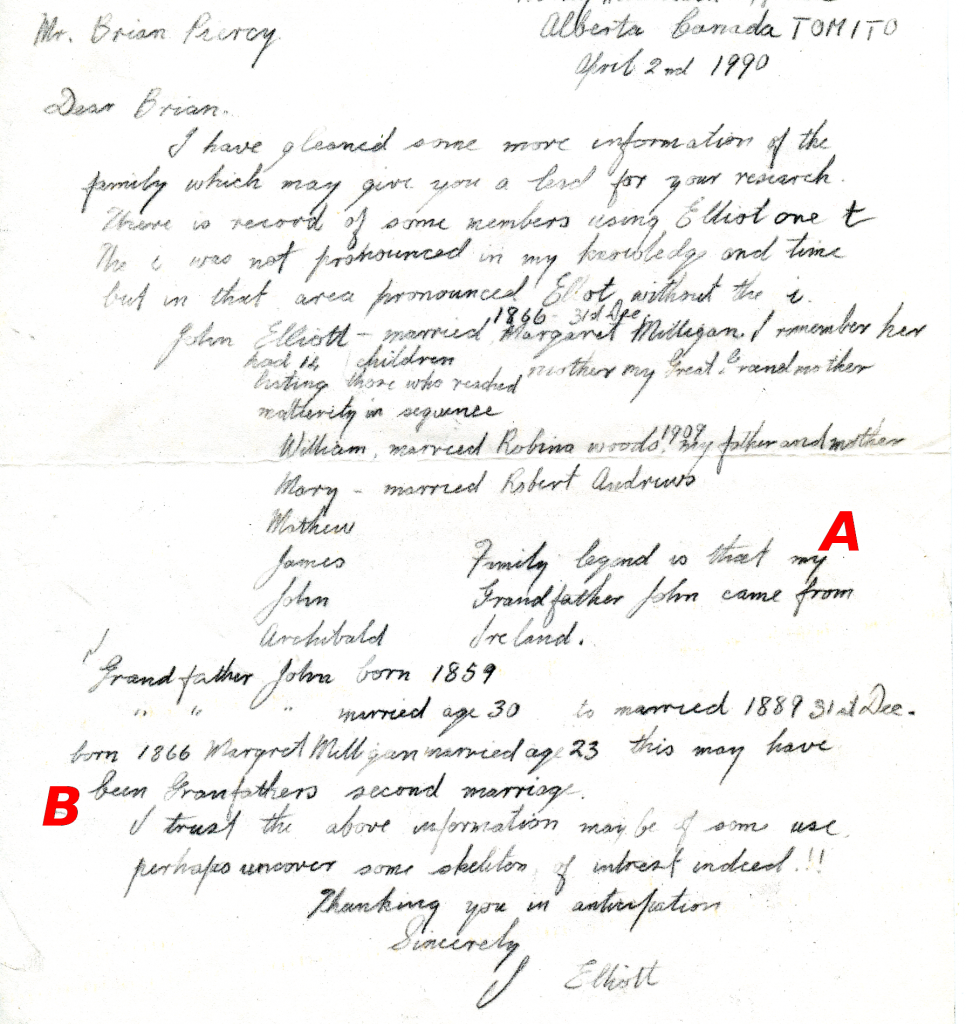 April 2nd 1990
Mr Brian Piercy
Dear Brian.
I have gleaned some more information of the family which may give you a hand for your research. There is record of some members using Elliot one t. The i was not pronounced in my knowledge and time but in that area pronounced Ellot without the i.
John Elliott – married 1866 – 31st Dec. Margaret Milligan. I remember her. had 14 children. listing those who reached maturity in sequence. mother my Great Grandmother.

Mr. Piercy wasn’t able to throw much light on the matter, since it appears from his reply that all he had to go on in those days was the IGI (International Genealogical Index, a rather rudimentary list of names published by the LDS Church). I, however, with the magic of the Internet at my fingertips, was able to hunt down all these people, and many more besides, using the extremely helpful vital statistics archive published by the Government of Scotland, ScotlandsPeople. But the two tidbits my grandfather had learned from his relatives back in Scotland, that piqued my interest, were these:

A Family legend is that my Grandfather John came from Ireland.

I’ll write more about that in a future post.

What I wanted to mention here is

B this may have been Grandfathers second marriage

“Grandfather”– i.e. John Elliott Sr., 1859-1915, my great-great-grandfather, about whom I now know quite a bit– probably had very little schooling and worked at manual labor his whole life. I’ve been able to trace his various addresses and occupations through the years using the Scottish Census and the birth and marriage records of his many children. For most of his life he was a brickfield laborer, and as he got older he became a “roadman” (a polite word, I believe, for ditch digger). He died on April 9, 1915 after suffering with a perforated gastric ulcer for a week. He was scarcely 56 years old when he died.

His wife Margaret survived him by almost 15 years and she was an iconic figure amongst the children of my grandfather’s generation. Known as Grandma Elliott or just Granny, it was she who stood on the dock at Port Glasgow and watched her eldest son (my great-grandfather) and his family embark for Canada in 1927. She gave birth to a very large family, and I guess her descendants are still going strong over in Paisley and Glasgow, although I don’t have any contact with them and the ones I have any knowledge of are surely long dead. (But if any of you are reading this don’t be shy about contacting me! I’d love to get caught up.)

John and Margaret were married in Paisley on December 31, 1889, when John was 30 and Margaret was quite a bit younger. Who could this mysterious first wife have been? Starting with the clue in my grandfather’s letter, I searched the ScotlandsPeople archive for John Elliotts who had been married in Renfrewshire prior to 1889 and after, let’s say, 1877 (when John would have been 18, a likely time to start thinking about marriage). What I came up with was this marriage registration, indicating that John had been married just two years previously, on December 9, 1887:

I knew I had the right John Elliott because his parents’ names, William Elliott and Mary Ingram, matched what I had already learned.

But the bride’s name was completely new to me: Agnes Scott, aged 30 (a wee bit older than the groom). She was a threadmill worker– Paisley was famous for the Coats Threadmill in those days (amongst other important industries). The bride’s mother, Agnes Gibb, was deceased by the time of the wedding (she died in 1875 after suffering from “Paralysis” for two and a half years). The bride’s father, William, was a Shawl Weaver. William, I have learned from various Census records, was born in Paisley around 1809, and his wife Agnes was born in Glasgow around 1813.

The wedding ceremony took place at 64 Millarston Drive, Paisley, which was also the residence of both the bride and groom, so it seems they had already moved in together. The wedding took place according to the forms of the Free Church of Scotland which is interesting because I know from other sources that John’s family were Anglican, so Free Church of Scotland must have been the Scott family’s denomination. Witnesses were William Elliott (either John’s father or his younger brother, both of whom bore that name) and one “I. (or J.) Scott” (possibly a cousin of Agnes’; in the 1861 Census there is a Janet Scott living in William Scott’s household, identified as his niece).

If we dig back in the Census records we see that 64 Millarston was actually the home of Agnes’ father William. In 1881 William’s household consisted of young Agnes (then aged 24, working at the threadmill), along with his son Robert (a Fire Clay Moulder) and Robert’s wife Mary, and their two children aged 5 and 7.

John, 22, was still living with his parents and seven siblings in the 1881 Census. And here’s the discovery that made me sit up and take notice: John and Agnes were next-door neighbors. John’s family and Agnes’ family appear on the same page of the 1881 Census; the Elliotts lived just a few doors down (at 62 Millarston). Furthermore, both John and his father William worked in the same industry as Agnes’ brother. I later confirmed (using birth records) that the Elliotts resided at 62 Millarston as early as 1867, when John would have been 8. The earliest mention I can find of the Scotts living at 64 Millarston is the mother’s death registration in 1875, when young Agnes would have been about 16 and John would have been about 14.

The bottom line here is that the Elliott and Scott families were neighbors for at least 12 years, and perhaps longer. John and Agnes may have known each other since childhood.

So, they finally decided to tie the knot late in 1887. Maybe John got Agnes pregnant and the wedding was forced; it’s not unlikely but impossible to know for sure. What happened then?

Agnes and John went on living in her father’s household after their marriage. But sadly, less than four months after the wedding, Agnes quite suddenly died.

In mid-March she came down with something called Puerperal Peritonitis. This is (so I have read) a post-partum infection, not necessarily fatal, but frequently so back then. Since a stillbirth should have generated a registration of death, and I can find none in the archives, I surmise that Agnes must have had a miscarriage and then, on top of the sorrow of losing her baby, suffered from an infection for two weeks before dying at home.

And with that, Agnes vanishes from our family history, along with the rest of the Scott family.

This is pretty heady stuff to think about. Agnes might have been the mother of a big family, but instead she died and Margaret came along the following year and took her place. John and Agnes knew each other for a long time before getting married… What kind of bond did they have? Agnes’ father and John’s father must have known each other for at least as long; what was their relationship? Was religion a point of contention between them? Did the fact that Agnes’ father was a (skilled) weaver whereas John’s father was an unskilled fireclay laborer ever come between them? Or the fact that Agnes’ father was twenty years older than John’s father? Did the fact that William was born in Scotland but John’s family were immigrants from Ireland figure in it? I am throwing out these wild speculations for a reason: It’s puzzling that John and Agnes knew each other for so long but waited and waited and waited before getting married. They were, after all, unusually old (29 and 30) at the time of their marriage.

My pet theory is that John and Agnes were long-time sweethearts but her father forbade them to marry because he didn’t think John was “good enough” for his daughter. When he finally relented, her advanced age contributed directly to complications that led to her death, obstetric medicine being as poor as it was in those days. Keep in mind that this is conjecture on my part, based on highly circumstantial evidence. There is absolutely no family oral history that I know of that supports my conclusion, and there are other ways to interpret the evidence.

I wonder how much of this story was known to John’s second wife Margaret. Margaret, though much younger than Agnes, worked at the Paisley threadmill too; could they have known each other? Been friends? Or is it possible that I, nosing around in the archives over a century later, actually know more now about John’s past than my great-great-grandmother Margaret did?

For me, discovering all this was intensely sad, but at the same time exciting. I was glad to be able to bring Agnes’ brief story to light at last. Previously she had been nothing more than a rumor in a letter that few people knew about, but now at least she has a name.