I moved from the ranger station to Rocky Mountain House, where I owned twenty-four acres purchased a couple of years before, which had been rented to the first veterinarian in Rocky area, Doctor Cole. The acreage was just outside the eastern edge of town at that time but has since been annexed.

I knew I would have to find some kind of job as my government pension would not amount to much, and our salary was not too high even when I resigned. I approached the Forestry Department to have my superannuation in a lump sum, as I wanted to build a greenhouse. I finally got them to agree and started with a small Lord and Burnham house growing bedding plants. I got a fairly good response, as previous to my starting, all plants and floral arrangements had had to come from Red Deer. Then from the District Agriculturist I learned that the Olds (Alberta) Agricultural College was starting a florist course. I attended the short course, as it was short to start with, but now it has developed into an extensive course in horticulture and floral designing.

I drove down to Olds and registered for the course, and found I would be sharing a dormitory room. I did not know who my roommate was, but went straight to the classroom. The instructor was a very able man and owner of a large florist business in Vancouver. That first morning after initial directions he proceeded to teach the class how to make Glamelias.

I would be following his instructions very closely, doing fine, then everything would fall apart. Most frustrating. We carried on to lunchtime, and when I finished in the cafeteria I returned to my room and started to pack my case. I was aware of another presence on the opposite bunk, and I guess I must have been quite agitated, and was certainly very frustrated. The other presence asked, "What is the matter?" When I looked up it was the instructor himself, Tony Bouchier. I told him I was going home, I would never make a florist in a dozen years, especially with a crippled hand. He talked to me, telling me he thought I could do it, that I would overcome my handicap, "and anyway I had to start you on Glamelias because those old gladiolas were just about finished." (In the early days of the florist course flowers were donated by different florists and growers.) I went back after lunch and managed much better, and following that I attended the two following years under different instructors to gain my diploma for proficiency in all floral designing, and taking no back step from anyone. I retired from the florist business in 1985. 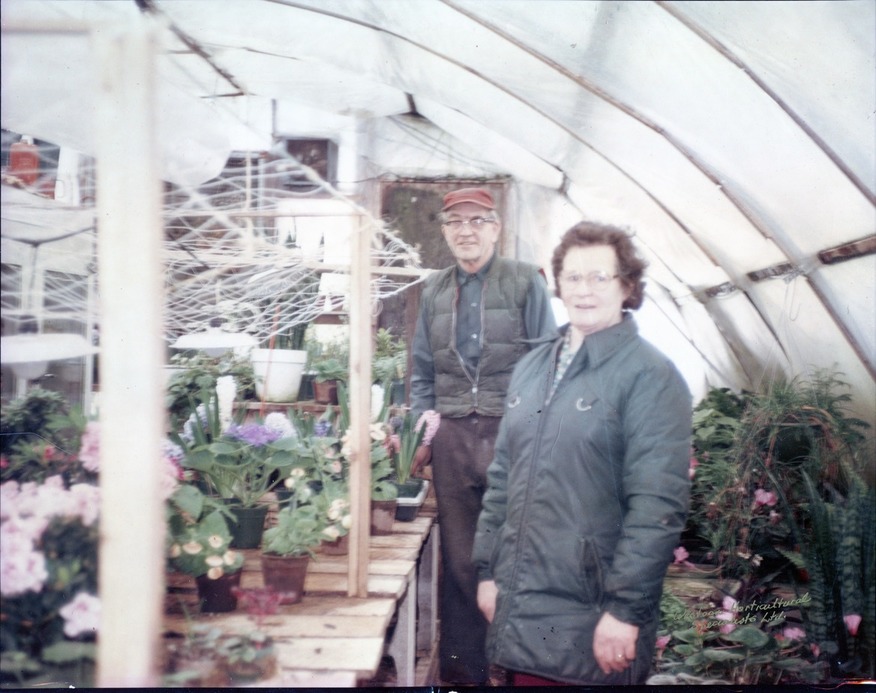 John and Kathleen in the greenhouse

John and Kathleen in the greenhouse, mid-1970's.

I have continued with my greenhouse growing potted plants, cut flowers, tomatoes, cucumbers, and bedding plants in spring, till the summer of 1987 when I finally retired for good as my health was deteriorating. In the next two years I had two operations and radiation treatment, then a serious accident which nearly took my life, as a result of which I am lucky and happy to be alive.

Looking back and remembering I consider I had a good life as I worked in the environment I enjoyed, out in the open close to nature, instead of being like many who work merely to earn a livelihood, sometimes in a boring job.

It would seem that my life was quite eventful; not so. At the time it was all in the day's work, just something that had to be done, and so I accomplished it as necessity dictated, to the best of my ability.

I am proud of the land of my birth, Scotland, and enjoy a short visit there, but this is My Land. I am proud to be a Canadian.