When Canada entered the war, it seemed that I, with previous military training, must join in. I wrote to the armouries in Calgary and was told to come on down. On the twelfth of September 1939 I caught a ride on the milk truck out to Red Deer, thence by train to Innisfail, the nearest recruiting place, and there I enlisted on September 13th. Shipped to Calgary, then out to Sarcee Camp in some old wooden shacks you could see through. What preparedness!! They had no uniforms—we were given a yellow armband with Calgary Highlanders inscribed on it—and there were only one hundred rifles for training the whole regiment. I used to put cardboard in my shoes each morning to cover the holes worn through.

Meantime they had started to build huts for us in a barrack camp at Mewata Park immediately north of the Calgary armouries. We moved into the huts before they were completed; at least they were better than Sarcee Camp. There I put in the winter of 39-40.

Winter came early that year; a bad blizzard in October. I was on guard at #1 gate wearing a greatcoat and cotton gloves. At changing of the guard at ten that night the sergeant of the guard took one look and said, "Fall in behind the guard." He pulled the guards off every post. We all had frozen ears and noses and when we ordered arms in the armouries our gloves were frozen to the rifle butts.

Next morning we found an injured Mallard duck, which had apparently flown into one of the armoury towers and damaged his wing. He was patched up and we kept him in the washroom where we fed him, and on occasion filled a bathtub so he could have a swim. There he resided in a large cardboard box 'till one Saturday night three of the boys roasted him on the end of a bayonet over a gas fire.

In early November I was given a few days leave to go home and make arrangements for my farm; I had a uniform by that time and arrived back home wearing tropical kit, shorts, and a pith helmet!

[2] Read more about John's training at Camp Shilo in the Calgary Highlanders' history.

In early spring 1940 I moved with the regiment to Camp Shilo near Brandon, Manitoba. There was nothing there when we arrived, only one water tap for the brigade of three regiments. These were the Calgary Highlanders, the South Saskatchewan, and the Little Black Devils, a Winnipeg regiment.[1]  We cleansed our eating utensils by rubbing them with sand. We lived in bell tents amidst the sand which was everywhere, even in the beer! Of course the building of Camp Shilo was started immediately but I only spent a few nights in huts being erected, before shipping out for overseas.[2] 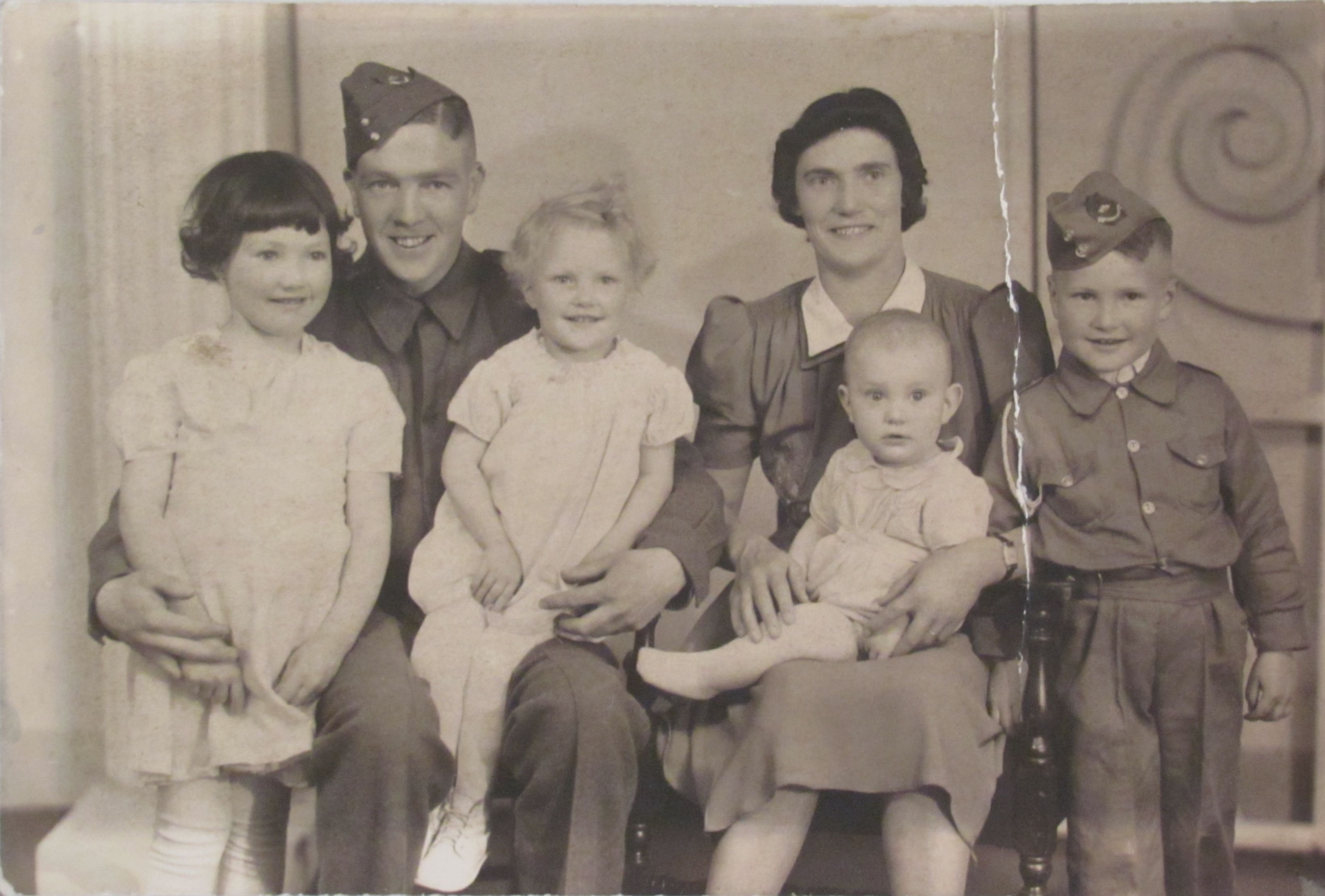 [3] This family portrait would likely have been taken during John's embarcation leave in August 1940... presumably before he got thrown in jail. This is the only photo we have of his first wife Mary. The children are Sheila, Ruby, Archie (on Mary's lap), and Boyd. Note that Boyd is wearing John's spare Calgary Highlanders cap, and is sporting a military-style haircut identical to his father's.

The regiment was on orders to move, so married men were given five days embarcation leave.[3]  I returned to Olds where my family was. The night before my leave finished I got a little too much to drink, got in a fight, and was thrown behind bars to sober up and late that night was bailed out but had to face the magistrate next morning. On appearing before Magistrate Breagle I was fined or, in default, given fourteen days. Being broke I said I'd take fourteen days whereupon he bawled me out and gave me time to pay after my next payday. On returning to the regiment I paraded to the company commander Major Bryan with a request for my pay, to be informed that the boys remaining in camp had been paid the previous day, but no chance, the books had been closed and forwarded, we were on the move. Two days later we boarded troop trains headed for overseas.

In Halifax, Nova Scotia, we boarded the Louie Pasteur, a French luxury liner not yet converted to troop carrying. We travelled in luxurious cabins although a bit crowded. We were six large liners in a convoy carrying most of the Second Division, and we crossed fairly fast, no incidents other than hitting a large whale in the middle, breaking its back. It hung across our bows for most of that day till the water pressure caused it to cut in two and drift away.

The night before reaching Scotland I was sitting on the floor playing my practice chanter when submarine attack sirens went. I nearly shoved it down my throat as I jumped up. Stuffed some cigarettes inside my jacket and fought my way up four decks to the boat deck where I had been delegated as part of the auxiliary boat crew. The officers, who had been having a formal dinner, were all in full regimental dress in kilts, and it was breezy!

[4] Actually, the sinking of the S.S. Athenia (September 3, 1939) took place a full year before the Calgary Highlanders arrived in Scotland (September 4, 1940).

We swung out the lifeboats and stood by as a welcoming escort of destroyers rushed round us throwing out depth charges. That was our first introduction to war, and just after that the S.S. Athenia went down with all the children aboard in the same area.[4]

As we docked in Greenock, Scotland, I found my memory of the old land had diminished in the intervening years. The fields looked like pocket handkerchiefs and the troop trains looked so small compared to Canadian trains, that I felt like saying, "Wrap them up, I'll take them with me!"

Crowded into the small trains with all our kit we travelled all night to Farnborough near Aldershot then marched to Guillemont Barracks right onto the square where we were formed up to hear instructions from Colonel Scott on conduct in event of airraid. Right then the alert went and a hedge-hopping German plane straifed right across the barracks. That was the fastest we ever got off a parade square!

On arrival in England I was given five days landing leave and headed for Scotland to visit my relatives there. I travelled with full kit, including arms and ammunition in case of invasion by enemy forces, in which case we would report to the nearest military. Invasion fears were very real at that time, just after the evacuation of British forces from the Continent at Dunkirk.

On arrival in London at Victoria Station I had to get to Euston Station for the train to Scotland, and walked as far as Leister Square Tube Station. I went down the stairway to reach the train platform, and there was only enough room to walk as people were sleeping right on the steps. I noticed an old couple, a real old Darby and Joan covered with a quilt, their arms over each other, fast asleep. I felt so incensed I could have fought the war right there. These were people who had been bombed out of their homes. All along the platform where we boarded the tube train were people sleeping; only enough room to walk along the edge of the platform to board the trains. Later on in the war the underground stations were all developed for airraid shelters, with bunk beds installed and necessary facilities and Red Cross stations with refreshments and so on.

Many of those poor people could be seen as nightfall approached, with bundles of bedding on their backs, headed for airraid shelters and underground stations to spend the night. (There were not many children as they had been evacuated to Scotland, Canada, the U.S.A. and the countryside away from cities and factories.) To many people these shelters were their only home.

Early in the war German planes dropped land mines by parachute, and they were devastating. Later the mines were discontinued as anti-aircraft guns could shoot the mines and explode them in the air.

I was in Paisley on leave at the time of an airraid, when one emergency aid station received a direct hit by a land mine which left ninety people killed, including four doctors, one of which was a Doctor Gibson, son of my mother's doctor who had delivered me. Many of the victims could not be identified; only Doctor Gibson's cufflinks were found to identify him.

The emergency shelter, constructed of reinforced concrete, was adjacent to a cemetery wall. The cemetery was closed but I managed to get in as I had flowers to put on my grandmother's grave, and I was due to return to my unit that night. I went round the hill and saw the havoc left by the land mine: a number of graves, coffins and cadavers blasted out of the ground. Soldiers were turning over concrete slabs exposing to air unrecognisable flesh.

I was due to go back to my unit, but decided to wait to see the proposed mass funeral. It was an impressive sight to see the ninety flag-draped coffins.

When I did get back to my unit I was four days late. When charged, I claimed I had a relative, Doctor Gibson, killed in the airraid. I was remanded while this was checked, and next day I was called to the orderly room and my O.C. offered his condolences. I presume they just verified that Doctor Gibson was indeed a casualty. Well, they say, "All is fair in love and war." This was war and I had four days extra leave.

In London the raid warning would scream day and night. The fighter planes, Spitfires and Hurricanes, were scattered in small groups around the countryside, and when the warning went the fighters would appear over hedges climbing to intercept the bombers. In daytime we could watch the dogfights and often a plane would be seen spiralling down streaming smoke. The fighter planes were scattered in small groups as a means of preventing more damage from bombs. One very well-known dispersal field was known as Biggin Hill in Kent, which gained tremendous credit for the number of enemy planes shot down.

At night the bombs dropped and obliterated whole streets, started fires and caused many casualties. The night raids were more spectacular; the bomb flashes and fires they created were an inferno.

Once I boarded the train in London but we stopped outside the city for five hours while the track ahead was cleared. There was a complete blackout punctuated by the flash of exploding bombs and the intermittent flashes of anti-aircraft gunfire and searchlights. This was the state of affairs during the Battle of Britain! On returning to my unit after leave I was assigned to P.A.D. duty, Passive Air Defence, on which—twenty hours on duty then twenty-four hours off—I manned, together with four others, a mobile pump, a Ford engine mounted on a hand trolley. We stood by all through each alert, and in the case of a bomb strike would trundle the unit to the closest fire hydrant or water reservoir and could throw four hose lines.

During the days I was off duty, when I could get a pass, I used to travel through the woods back of camp to the village of Blackwater, close to Sandhurst Military College. Coming back late one night I was captured for a spy. There was thought to be someone signalling to enemy aircraft from the woods, this being the route the German bombers used to and from London. I was thoroughly interrogated but managed to get them to fetch my company Sergeant Major who fortunately identified me.